I Luv 2 Fish Some men would rather be photographed with their Fish than their Wives . . .

Why is my Hat on Fire?

People make fun of my mosquito coil … but it works. As rings of smoke rise from my hat, many anglers have run up to me while fishing saying my hat is on fire … and then burst out laughing. I remember the day when I was a youth (25 years ago) fishing the Gold River and decided there had to be a better way to keep the black flys and mosquitos away. At age 14, my entrepreneurial spirit came through and I decided to tape a coil on my hat. Lots of other anglers made fun of me until they realized it worked. Over the next weeks, some of my fellow anglers that made fun of me even showed up at the river wearing them. I had started the FLY COIL TREND. I thought I was onto something and in 1990 I made a trip to the patent office in Halifax and tried to convince them I had the next BIG idea. Due to safety reasons (a fire on your head) they quickly dismissed my venture. However, I still wear the Fly Coil … but I must confess that I have caught my hat on fire, and burned a few holes in my fishing jacket. A little dangerous, not pretty, but it works! 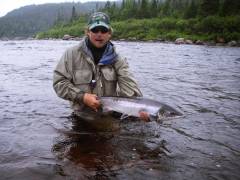